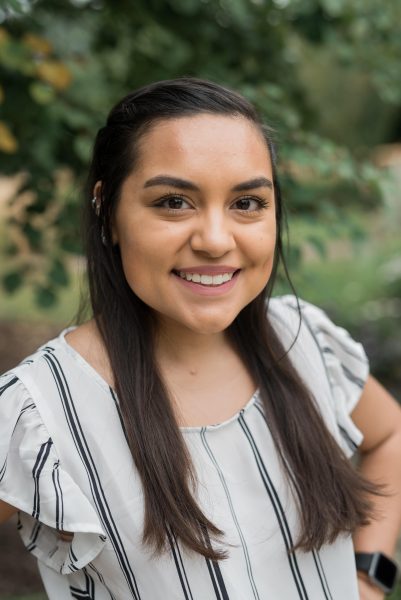 On November 7th, Liliana Delgado (She/Her/Hers), along with other students, met with the university’s administration at a panel to address the demands Students Against Racism brought forward. Delgado was witness to the racist defacing of one of the dorms on-campus and took to bringing attention to the incidents that have been happening on campus. Delgado is a junior majoring in math with a minor in physics. Although she is not officially declared in the Women and Gender Studies Program, she has taken many classes and claims that they have prepared her for this activism.

What was going through your mind when you were on the panel?

That was such a weird experience. I am very fortunate that I love public speaking […] so going into it, I knew I could handle the pressure. It was still very, very scary because I’ve never been in a situation when I’m sitting at a table with six administrators who were strategically chosen to represent all of the university and here I am just a little undergrad trying to fight bigotry. It was very surreal and it was empowering because I was invited to sit at the table, […] but also kind of scary because […] we had no idea what was going to come out of the other side of the table. So when we were sitting there, I was physically shaking […]. [Being on the panel] fueled my fire to continue these conversations and keep fighting. It was both invigorating and exhausting and stressful, but awesome because it was important to be up there and to be doing this work. I know there’s a lot of people in the audience who desire to do this work, but aren’t in the headspace; they don’t have the support system and things like that so I was very fortunate to be up there.

Having taken so many Women and Gender Studies classes, how do you think they have prepared you as an activist and how to deal with these situations?

[T]hese classes have armed me with the tools to understand some of the things that I face, and fueled my fire to encourage me to be an activist for these things. So it definitely prepared me for how big the situation […]is and it just made me smarter. It gave me an interesting perspective because […] if you looked at the table, there were several women, several queer people, and so it doesn’t just stop at racism— it’s so intersectional. My WGS classes have taught me how intersectional this work is and that we’re not just fighting one “ism”—racism—we’re fighting misogyny and capitalism. All of these intertwining things. And I don’t think I would have the level of understanding I do about that had I not taken Women’s and Gender Studies courses.

Who do you think should take Women and Gender Studies courses?

Everybody. Everybody can benefit from these kinds of things. There’s just so much to learn and I think everybody can take away something no matter the identities you hold or the type of activism you do. There’s definitely something to learn, and there’s quite a variety of classes offered so you can find something more for your taste. Absolutely everybody could benefit from it.

What other factors have influenced your activism.

Definitely, my personal identities because I can’t turn them off. A big part of it too is the support system that I have. I’m in a fortunate position where my parents are incredibly supportive and understanding. They understand racism, they understand misogyny, they understand the patriarchy. My parents are definitely a huge part of my support system, and because of their understanding, that has helped some of the work that I do because they’re able to push me and give me advice on certain things. […]Definitely having an amazing support system has helped because I trust my support system, because they’re able to give me advice and criticism and things like that, and I can use it to shape the work that I’m doing. I don’t know if it was luck, but by some circumstance, these events happened to me. […] I think these things happened to me for a reason that allowed me to do this work.

What would you say is the hardest part?

The emotional labor. It’s both exhausting and rewarding at the same time. Not only am I a student first, I’m a human first. Sometimes I forget that and sometimes I’m just so consumed by this work. This work and my school work, […] so trying to balance that is very difficult. Another thing too is the work that I’m doing is unpaid. And I know the work that I’m doing should not go unpaid and that just kind of sucks. […] Not that money should be the sole motivator, but it would be nice to reap something tangible. Because right now we just have these ideas that the administration wants to put in place and they’re fantastic ideas but there’s nothing tangible yet.

What keeps you motivated?

I just deeply care about this. It was a terrible experience that I went through that I don’t want anyone else to go through. […] I was fortunate enough to be put in a situation that didn’t cause any physical harm and in a way bounce back from and continue to do things. […] I have my future to look forward to. Outside of activism, I want to go to grad school, get an REU (Research Experience for Undergraduates)  next summer. I have other things to keep me going. And I just so deeply care about this, and it’s just so important to me. Why is it? I guess I don’t really know, I just know that it is. That thing inside of me that’s saying, “This is so important, you care about this, you love this work, you love yourself, you love the other people you’re working with.” That’s what’s keeping me going.

My biggest piece of knowledge is that systems of oppression are that. They are systems and I think that is always something to keep in mind. It’s not individual instances. It’s not just microaggressions, it’s not blatant macroaggressions—it’s a system that allows those to happen and allows individuals to do those. At any point in anyone’s activism journey, it’s okay to pull out, it’s okay to say no. That’s something I’ve learned for myself, is how much can I extend myself? Sometimes I do have to say no, […] and that’s okay and that’s so valid and even at the time if it sucks to do that, sometimes you just have to, because before any of those other things you’re a human first so you must exist as a human first.