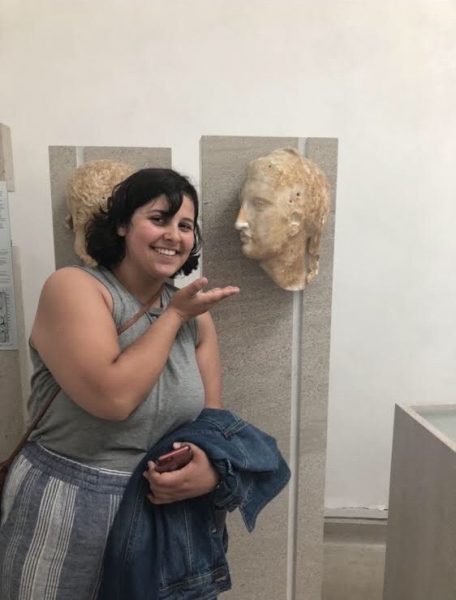 Was the double major something you’ve had since your first year?

Yeah. I declared my major in Women’s and Gender Studies after my English major freshman year. So after my first semester.

Is there a specific event in your life that drew you to major in Women’s and Gender Studies?

I was in the learning community [during] my first year, the writing and gender learning community. I had Dr. Michèle Schaal for [WGS] 201 and she was just the most fantastic woman I’ve ever seen. I don’t even know how she taught that class so well, but she did, and that was one of the hardest classes I’ve ever taken in college. And to this day, I ask myself, “what would Dr. Schaal do?”

What Women’s and Gender Studies class that you’ve taken has been your favorite? Why?

Write Like a Woman. Christiana is a fantastic teacher. I don’t think there’s anyone on campus who can make you a better writer. It was interesting to see what it meant to write like a woman. It’s not what I thought. It was different from all the other WGS classes just because it was more creative writing based, rather than focusing on theory.

You have a double major in Women’s and Gender Studies and English. How do you see English and WGS intersecting in your future career?

I want to go to [graduate] school for feminist studies. I want to end up being a professor. That would be my ideal situation. I think English and Women’s and Gender Studies, as well as my minor in speech comm, all work together to make me a better candidate for that. Especially when you’re talking about literature, Women’s and Gender Studies fits in pretty well, because when we’re looking at the canon, we hardly see any women. And when we do, it’s straight, white, cis women, so I think having that extra perspective is nice.

How has Women’s and Gender Studies impacted you outside of your education?

I’m more critical of things I see. I think it helps me be more critical and aware of what’s going on around me. Like before I pursued the WGS major, I wasn’t super interested in politics or in focusing on local or international news, but I think after getting interested in this major and these classes, I was able to open up see: “Hey, the world does not revolve around me!” And I think that’s a really good thing to be able to admit, and I’m glad WGS was able to help me find that. I think it can help other people find that too.